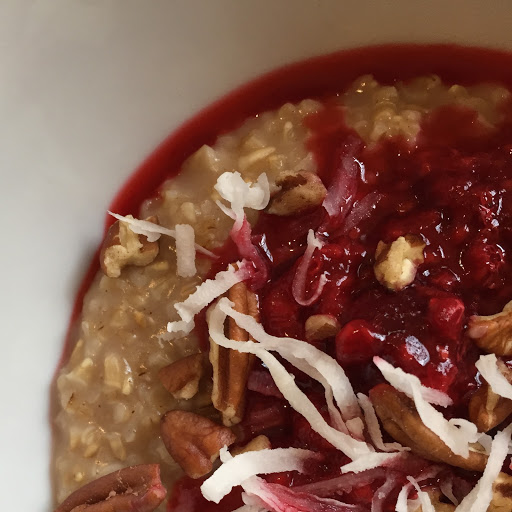 This oatmeal sounds very complicated but is quite the opposite. It requires a bit of prep but the pay off is that you cook it once and it lasts for several days. You can swap out pretty much all of the ingredients and create your own crazy concoctions. If your fruit is not that sweet or you are having a difficult time pushing unsweetened oatmeal on your family, you can drizzle a teaspoon of maple syrup into the oatmeal and mix in before topping with the fruit compote. Add a tablespoon of peanut butter for PB&J oatmeal. Sunflower or pumpkin seeds make a nice alternative for those that are allergic to nuts. Peaches and blueberries or apples and raisins would be great too!

In a medium sized pot, gently toast the oatmeal but simply placing it in a dry pot over medium heat for a few minutes, stirring occasionally. This brings out a nutty flavor in the oatmeal. Add three cups of water and a pinch of salt. Bring to a boil and then reduce the heat to low. Simmer the oats, stirring frequently until the oats are tender and creamy, about 20 minutes. Add in the cinnamon, mix in well.

For the raspberry compote, in a medium saucepan, add the the frozen berries along with a small squeeze of lemon juice and a couple of tablespoons of water. Warm the mixture gently, stirring occasionally, until the raspberries have begun to break down slightly.

Once cooked all the way through, remove from the stove top and stir in the vanilla.

To serve, pour about ½  cup oatmeal into a bowl, mix in (optional) teaspoon of maple syrup and top with a hefty tablespoon or two of the raspberry compote, dried coconut and pecans.

Both the oatmeal and raspberry compote can be stored separately in the refrigerator for several days.The oatmeal will thicken in the fridge. You can simply rewarm with a little almond or soy milk to loosen it up a bit. 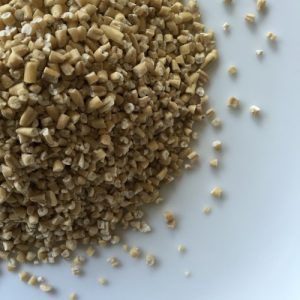 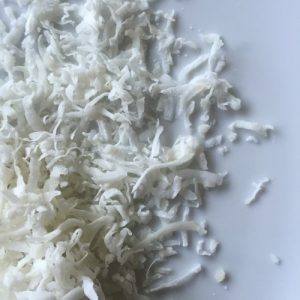 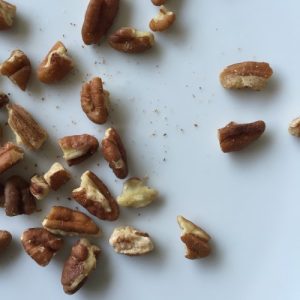 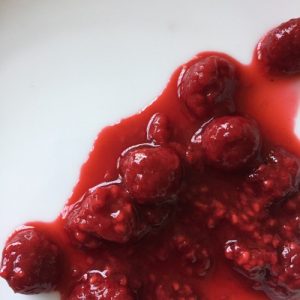 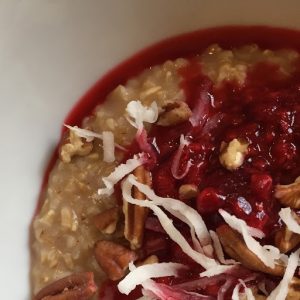